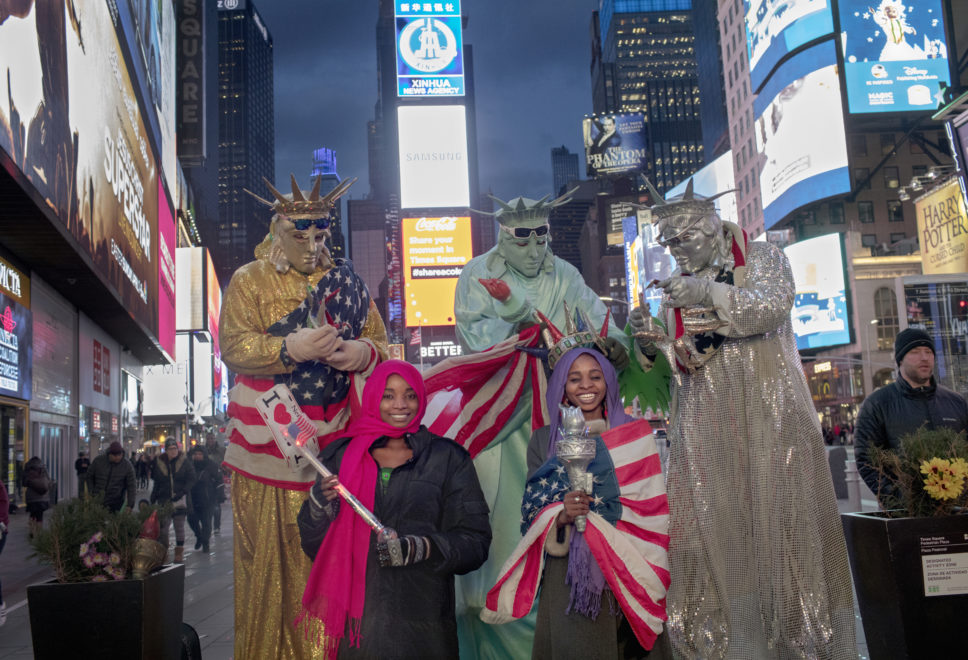 Teenage Boko Haram survivors YaKaka and Hauwa shared their stories with US lawmakers and members of the United Nations during a 16 day visit to the United States. The girls were visiting the US as guests of the nonprofit Too Young to Wed, whose mission is to protect girls’ rights and end child marriage.

This March, the nonprofit I founded, Too Young to Wed, brought Hauwa and Ya Kaka, two incredible young women from Nigeria — featured in the NYT Sunday Review story Child, Bride, Mother: Nigeria — to the U.S. to advocate for themselves and the thousands of other girls like them. We made the decision to bring them here because their stories were among the worst I’d heard in 15 years of reporting on this issue. In 2014, at 14 and 15, both girls were kidnapped from their villages by Boko Haram militants and forced to marry fighters and bear their children. “My parents refused to give me away in marriage,” said Hauwa when we met in the fall of 2016. “So they killed them in front of me.” The girls escaped but both lost their children due to malnutrition and lack of survivor services. While it was not easy to share their stories, they persisted because there remain thousands, not hundreds, more girls missing at the hands of Boko Haram fighters in the region — a fact in direct opposition to the prevailing narrative, which centers on little more than the 276 Chibok school girls abducted in 2014, 112 of whom remain in captivity. Bringing Hauwa and Ya Kaka to Capitol Hill in Washington D.C. and the United Nations in New York was one of the most profound and humbling experiences I’ve had.  Over the next couple of weeks, I will be publishing the stories about their visit and their incredible bravery on my blog, starting with this one by NPR.

Standing in Times Square in front of street performers dressed up as the Statue of Liberty, the two teenage girls look like typical tourists. They’re grinning and posing on their first visit to New York City.

But 17-year-old Hauwa and 18-year-old Ya Kaka didn’t come just for fun. They visited the U.S. this month to meet with members of Congress and U.N. officials, telling the story of the traumas they went through after being captured by Boko Haram in Nigeria in 2014. They urged the U.S. to bring pressure to help free the thousands of girls and boys abducted by the militant group.

Ya Kaka was kidnapped along with her younger brother and sister. She was given to an insurgent as his wife. He and others repeatedly raped and beat her. She gave birth to a son.

Hauwa was abducted by Boko Haram members who came to her home and demanded to take her away. When her father and stepmother resisted, the militants killed them and took Hauwa.

The girls, whose last names are withheld for their safety, do not know exactly how long they were kept hostage. Ya Kaka thinks about 14 months passed before she and three other girls were able to walk away when the insurgents left camp to attack a town.

To hear more from the girls, please see the rest of the story here.

A Year of Firsts, Filled with Love

PBS NEWSHOUR: Girls who escaped Boko Haram plead for help for others