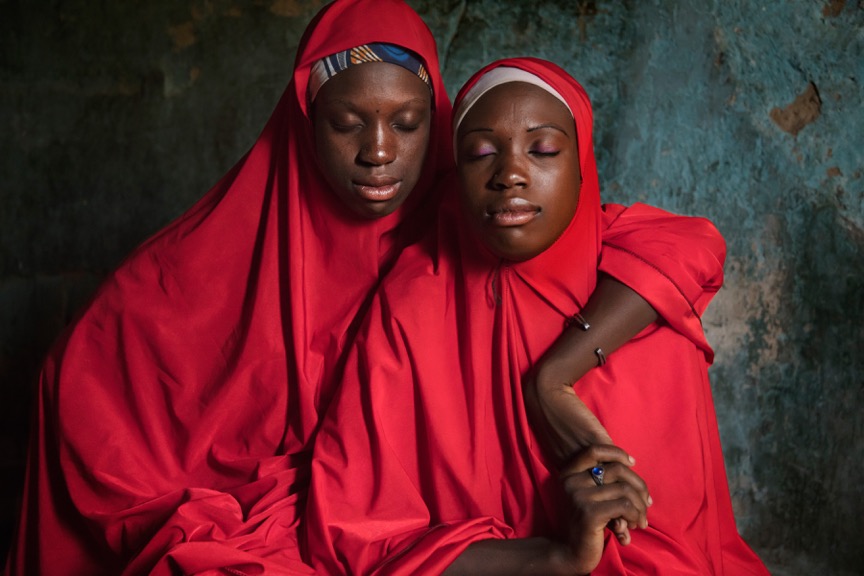 Portrait of 14-year-old twin sisters Hassana and Hussaina. The sisters were abducted at the age of 11 by Boko Haram fighters and made the brave decision to escape after hearing talk of their impending marriages. “Any time the insurgents suspected we were planning an escape, they would refuse us food,” said Hussaina. “They wanted us to be weak so we could not attempt to escape.”

Last month, The New York Times Sunday Review published my latest Too Young to Wed project — this time about girls kidnapped by Boko Haram fighters and forced into marriage in northern Nigeria. Though I’ve spent the past fifteen years reporting on the issue of child marriage and its grave impact on the human rights of girls, I had never heard anything like the stories shared by the brave young women in this project. Many thanks to Lourdes Garcia-Navarro and our friends at NPR for helping us share this important story.

Here’s a transcript of the interview in full:

We turn now to Nigeria. You’ll recall in 2014, almost 300 schoolgirls were kidnapped by Boko Haram in Chibok. It sparked a global outcry. But according to new reporting, that number may barely scratch the surface of the problem. In a piece called “Child, Bride, Mother: Nigeria” in today’s New York Times, photojournalist Stephanie Sinclair reveals that there could be nearly 25,000 girls who’ve been taken. And a warning to our listeners – some of the details of this conversation include graphic descriptions. She joins us from our studios in New York. Thanks for being with us.

STEPHANIE SINCLAIR: Thank you for having me, Lulu.

GARCIA-NAVARRO: How many girls are missing? What is the number that you discovered?

SINCLAIR: Well, there are no exact figures. But the latest figures that I had from the head of the Borno State Emergency Management Agency was that they have at least some whereabouts of about 9,000 girls who were abducted. But they think that there are an additional 13,000 girls who are unaccounted for in the areas they’ve been able to assess. And that’s not counting the areas that are too dangerous to do more investigation.

GARCIA-NAVARRO: You managed to speak to some of them that had returned. What did they tell you? Who are these girls?

SINCLAIR: These are girls who saw no chance of being rescued after being held for – some of them – four years and decided to just make a run for it, you know, when the opportunity was there.

GARCIA-NAVARRO: And so what did they tell you about their ordeal? How old were they when they were taken? What happened to them while they were being held by Boko Haram?

SINCLAIR: I mean in all honesty, in 25 years of my doing this profession, I have never heard stories as horrific as these girls described. They told me stories from them kind of being pregnant and trying to escape and getting captured by the insurgents and then being lashed a hundred times while pregnant so bad that they had to go to the hospital because they weren’t going to live – that they were taken there.

Other girls say that they intimidated them from trying to escape by killing other girls in front of them, setting them on fire, starving them so they were so weak that they didn’t have the energy to try to escape. Many of the girls left either pregnant or carrying children. Some of the girls’ children died along the route home. Some of them died as soon as they arrived (unintelligible). Just they didn’t have enough milk to give the kids. And they were so malnourished themselves that they just – you know, they just couldn’t keep them alive.

GARCIA-NAVARRO: How old were these young women?

SINCLAIR: I met girls who were abducted as young as 10 years old. Many of them – ’cause some of them had been held, you know, two to four years, most of the girls I spoke with were between the ages of 14 and 17.

GARCIA-NAVARRO: And many of them had children?

SINCLAIR: Almost all of them had children.

GARCIA-NAVARRO: Why do you think we haven’t heard about these women – these young girls – before?

SINCLAIR: Well, you know, I asked that question when I was there. And what I was told is that the focus has been on the Chibok girls – that, you know, there was an international outcry over these 276 girls – and rightly so. I mean, it’s horrific to think of, you know, over 200 girls going to school and being abducted at one time.

Having girls for fighters to marry is one of the things that they can recruit fighters with. You know, if you join us, we’ll get you a beautiful wife. And so many of the girls reported this. And, also, when they have children, they’re going to be raising these children to then reinforce their fighting ranks because they’ve been fighting for so long.

GARCIA-NAVARRO: As you mentioned, you’ve worked on issues related to child brides for a long time. You founded an organization called Too Young To Wed. You know this issue. I should also tell our audience we know each other. And when you told me about this story, you said it was the most important story that you’ve ever worked on. Why?

SINCLAIR: I definitely think the child marriage issue is – it’s my life’s work, and it’s something that I think is extremely important. I mean, just statistically, girls are married every two seconds around the world. But rarely have I heard this kind of abuse. The abuse is so extreme. And that’s just what I find so unacceptable.

I mean, I can’t even imagine what the public response would be if this happened in another, more developed country. This isn’t just a development issue. This is an emergency issue where these girls are in desperate need of help – not just the ones who are still abducted but also the ones who have escaped by themselves and don’t have the support that they need.

GARCIA-NAVARRO: What’s been the Nigerian government’s reaction to this? Have they been getting involved?

SINCLAIR: The story just came out last night, so I haven’t heard from them since the story came out. I will say that when I spoke to them, at least the members of SEMA, which is the emergency management – the State Emergency Management Association – I mean Agency – they were supportive of us getting the word about this – out about this. They need more support. President Buhari has definitely stepped up efforts against Boko Haram – but not enough compared to the scale of what’s happened to the people out there and to the girls in specific. So their need – they need more support.

GARCIA-NAVARRO: Stephanie Sinclair – her story is in today’s New York Times. You can see photos there and online. There’s also a 10-minute film. Thank you so much for being with us.

SINCLAIR: Thank you for having me.