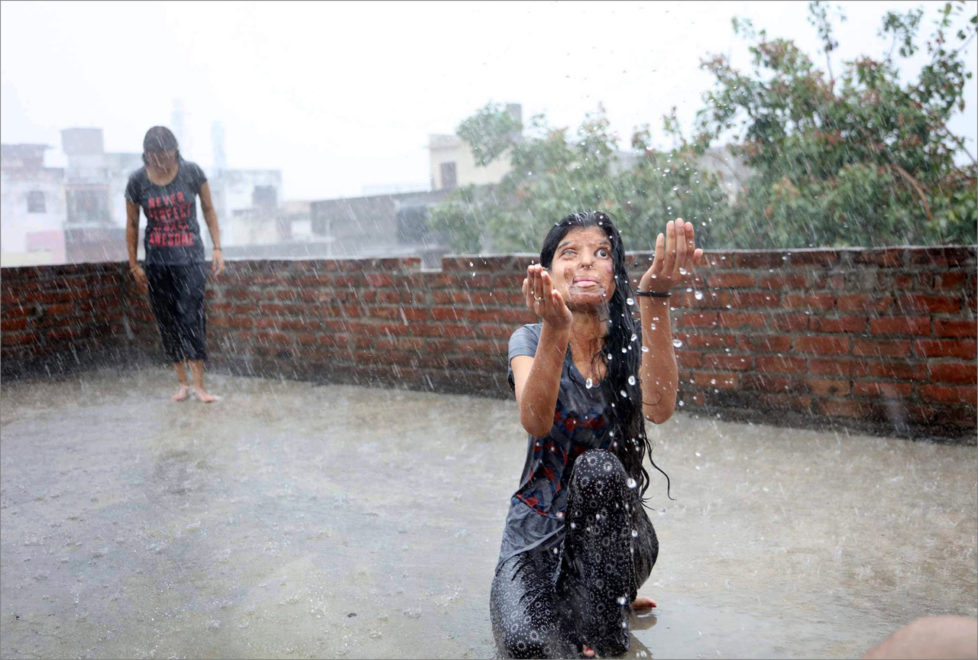 Ritu Saini (foreground), 21, and Rupa, 23, enjoy monsoon rains on a roof in Agra, India. Both women are acid attack survivors. A disfiguring and sometimes deadly retributive act generally taken by, or on behalf of, men whose advances the women rejected, acid attacks disfigure hundreds of women and girls in India every year. Formerly a volleyball player, Ritu was attacked by her cousin. After several reconstructive surgeries, she lost her left eye. Rupa was attacked when she was 15. Ritu now spends her days educating people about acid attacks while working at Sheroes Hangout Cafe in Agra, India, which is staffed by acid attack survivors and supported by the group Stop Acid Attacks, which advocates for policies to help acid-attack survivors.

Today it was announced that I am the recipient of this year’s Anja Niedringhaus Courage in Photojournalism Award, granted each year to a female photographer since Anja’s tragic death in Afghanistan in 2014 by the International Women’s Media Foundation. It is a tremendous, if bittersweet, honor to win an award in Anja’s name. I’ve long been moved by IWMF’s mission to unleash the potential of women journalists as champions of press freedom to transform the global news media. Today, I feel this is needed more than ever. I am humbled and proud that the jury would recognize my photojournalism in this way and be one of the women journalists supported and empowered by this prestigious organization. Not only will this award support my continued work, but I am grateful for the awareness such a high profile honor will bring to the stories I shared in my application, including Ritu’s above, which was made on assignment last year for National Geographic.

A heartfelt congratulations to American freelance photographer Nicole Tung and Greek AFP photographer Louisa Gouliamaki who were also honored for their courageous work.

For those who are interested, here is the Jury Statement, that was kindly shared with me:

While the work was done far from places that typically generate headlines, Stephanie dug deep into how child marriage has altered the fate of tens of thousands of girls. She portrays their lives in a quiet and compelling way with dignity, depth and empathy in equal measure.

Sinclair’s poignant and enduring coverage of atrocities experienced by vulnerable young girls and women portray the cruelty of barbaric practices such as child marriage, genital mutilation, acid attacks and harsh realities faced by women and girls around the world. Her photos are deeply intimate and touch your soul. Courage is not only defined by facing risk on the front lines of war but also displaying emotional and intellectual courage required to continue to bear witness to scenes of despair with eloquence and compassion.

Her skillful use of light, movement and composition add considerable depth to her photos. We are drawn into the lives of three Nigerian girls, their faces softly illuminated in an otherwise dark room. The motion of the Afghan girl writhing in pain from self immolation, fearing her husband’s reaction to a simple broken TV, portrays her shifting reality and portends the labyrinth of pain she will endure for the rest of her life. The photo of a girl clutching a wall during childbirth transports us directly into the clinic room.

Taking her mission a step further, she founded a non-profit organization to protect the rights of women, continue to explore the issues more deeply and empower young girls with scholarships and workshops. It is a testament to her deep sense of humanity and commitment to not only show the world community the brutality endured but provide assistance, advocacy and solutions to give back to these communities of brave young women willing to open their lives to her camera.

Her entry received unanimous support among the judges, applauding her commitment to leverage her photographic expertise to advocate for a worthy cause. We hope it serves as a new model for the 21st century photojournalist.

This long term commitment in combination with the powerful images turns Stephanie into the perfect winning candidate of the Anja Niedringhaus award.”