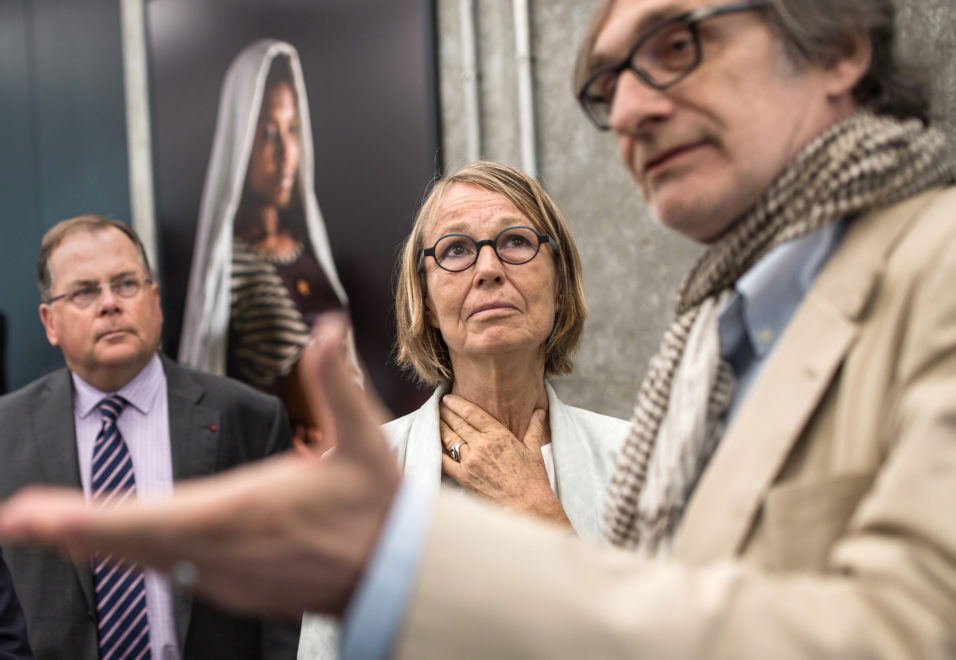 French Minister of CultureFrançoise Nyssen reacts to the Too Young to Wed exhibition during a tour with Jean-François Leroy, art director of the new Arche du Photojournalisme. Photo © Laurence Gee

Like many visitors to the Arche du Photojournalisme in Paris over the past few months, Françoise Nyssen left the upset by what she witnessed.

“I am in shock… I am a little overwhelmed by what I saw,” a reportedly teary Nyssen told Le Figaro following her August 1 visit to the Too Young to Wed exhibit atop the Grande Arche de la Défense to the city’s west. “It is absolute horror and it is now, it is today and in our world.”

As France’s minister of culture, Nyssen manages the country’s national museums, monuments and cultural centers, and promotes the arts at home and abroad. She is essentially tasked with protecting the French identity on these fronts. With that responsibility in mind, Ms. Nyssen recently pledged that child marriage has no place in France’s national identity – an important announcement given the 70,000 girls under the age of 18 threatened with forced marriages in the nation according to the French nonprofit organization Group for the Abolition of Sexual Mutilation (GAMS).

“The subject of these young, married children deserves all our indignation and revolt,” she told France’s second-largest daily newspaper. I couldn’t agree more.

I’ve now spent 15 years photographing child brides with the distinct goal of moving people – dignitaries and citizens alike – to support efforts to end child marriage and assist victims and at-risk girls. I want everyone to walk away from viewing my images feeling the way I have as I watched girl after girl forced to marry to much older men. I am pleased the response in Paris seems to be just that; and not solely from the exhibition’s female visitors. Just this morning, in fact, I received a moving email from a Parisian man, in which he wrote, “I have no words to express how deep I have been touched by what I have seen, how deep I have been touched by your pictures, and I have no fear to tell you that I have cried … Since today I have the feeling I have found THE cause I have to defend, and I have to fight for, I want to thank you for this.” 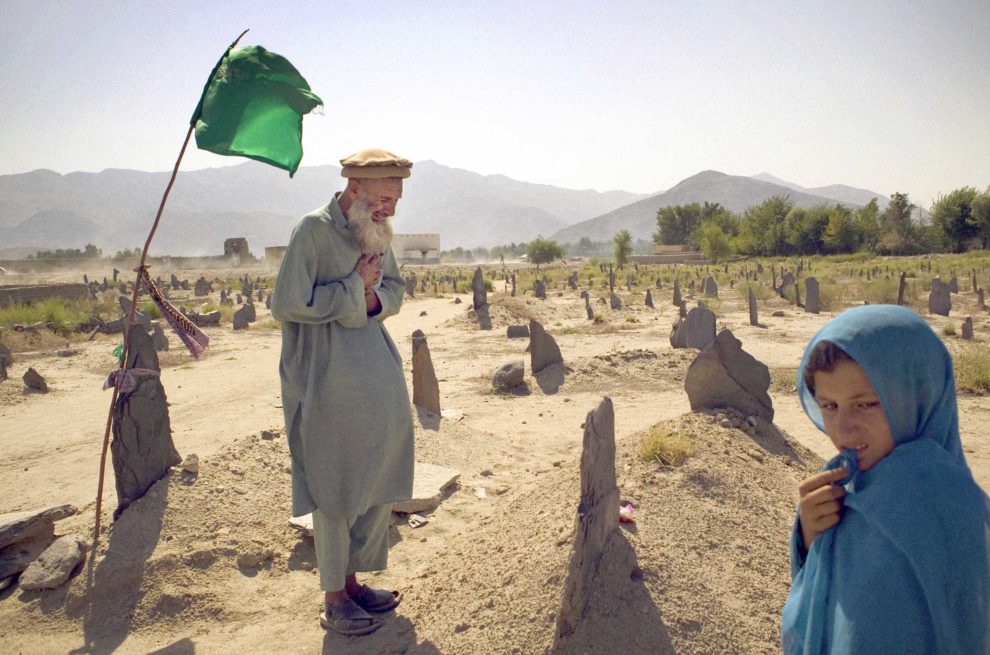 Niamat weeps over the grave of his daughter Khalida, who set herself on fire after enduring years of abuse from her husband and in-laws. Her younger sister, Khadija, 8 (right), was her main caregiver while she lay dying with burns. The family lives in a small village outside of Jalalabad, Afghanistan. Photo © Stephanie Sinclair/ Too Young to Wed

Corinne de Conti, president of City One 111 and person in charge of the rooftop area of La Grande Arche de la Défense, confirmed that this type of reaction was a common response from what she personally witnessed over the summer. “People don’t leave the exhibition the same people they went in,” she told me as we shared a coffee during my second visit to the show last week.

These responses make all the hard work worth the effort, not because I enjoy upsetting people, but because real change starts to happen when people are moved in such a manner; it’s where a sincere dialogue starts; where action starts. People contact their lawmakers and become activists moving the needle on culture and laws that affect the issue. And this has been my ultimate goal with the Too Young to Wed project from its inception all those years ago.

As the Too Young to Wed exhibition comes to a close this Sunday, September 24th to make room for a retrospective by one of my all-time favorite photographers and people, Eugene Richards, I am humbled by and grateful for the show’s success. With the help of Jean-François Leroy’s New Evidence SAS and the 2e Bureau, it was featured in dozens of  television reports, newspapers and magazines since its opening on June 1. The exhibit – which includes 175 of my images on child marriage, spanning 15 years and more than 10 countries – is the largest collection of my work to date. While many of these pictures have previously been published or displayed – at the Whitney Museum Biennial in 2010 and at the United Nations headquarters in New York in 2012 and 2014 – sixty-five percent of the images in Paris had never before been exhibited.

To conclude the extraordinary experience, I had the opportunity to walk through the space with Marlène Schiappa, France’s secretary of state for gender equality. During our 40-minute personal tour of the exhibition, we discussed how two of the girls in those photos will be traveling to the United States when to meet with senators in March. Her face brightened as we discussed the possibility of bringing two of those girls to France as well, this time to testify before parliament. Through our nonprofit Too Young to Wed, we’re now beginning to explore that opportunity.

This project has always been about protecting the world’s most vulnerable girls. I thank the hard-working team at the Arche du Photojournalisme, who, by allowing the enormous images to cascade from the ceiling like tapestries, made me feel like the girls were really there telling their own stories. I’m hopeful some of them will be able to do so in-person very soon.