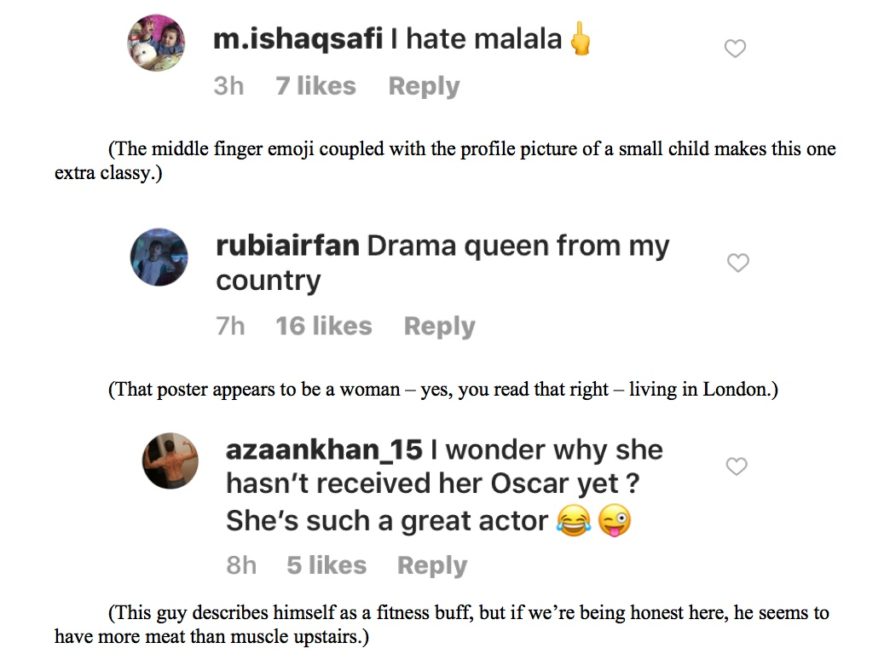 Last Wednesday, October 11, marked the sixth International Day of the Girl, a day to be mindful of the hardships endured by so many girls around the world and to promote efforts to improve their lives. With that in mind, I wrote my last blog post about Malala Yousafzai, a native of Pakistan whose staunch advocacy on behalf of girls earned her an assassination attempt from the Taliban at the tender age of 15. Thankfully, she recovered and has gone on to champion girls’ rights, especially their right to an education.

Educating girls shouldn’t be all that controversial – neither should someone who supports that cause. And yet, here are the kinds of comments that were posted beneath the photos when I shared that entry on a few social media feeds.

Let’s review: Malala Yousafzai was shot in the head while sitting on a bus on her way home from school. She would not only recover from the injury, but would double-down on her efforts to help girls, writing an autobiography, founding a nonprofit advocacy organization, and lobbying everyone from the United Nations to Queen Elizabeth II on behalf of girls’ education – all before enrolling as a freshman at Oxford this fall.

She doesn’t deserve an Oscar, @azaankhan_15. She deserves a medal – oh, wait, she actually has one of those. It’s called the Nobel Peace Prize and, at 17, Malala was the youngest person on Earth to ever receive it.

If someone as courageous and accomplished as Malala is subject to this kind of blatant disrespect, can you imagine how difficult it is to be a regular girl in Pakistan, or places like it, who just wants to go to school, pursue a passion and be treated with dignity? Just last week came this story out of Pakistan about a man who reportedly abused his wife for four months following the birth of their child, ultimately setting her on fire in early October as retribution for having a girl. The woman remains in critical condition.

Lest you think the West has a lock on gender equality, we’ve just learned of rape, sexual assault and sexual harassment allegations against noted American film producer Harvey Weinstein (a six-time best picture Oscar winner for those, like @azaankhan_15, who might be keeping score) that date back three decades. His alleged victims run the gamut from personal assistants to A-list actresses. And, now, to show solidarity and the magnitude of the problem, our social media feeds overflow with the words “Me, too,” as countless women share their experience with similar offensive, unwanted male behavior.

And perhaps that’s no surprise given the leadership provided by the current occupant of the White House.

It should be more clear than ever that the fight for girls’ rights must remain a global priority, because for every ignorant online troll who dismisses a woman like Malala as a “drama queen,” there’s a powerful public figure who seeks to devalue and debase women as a matter of public policy.